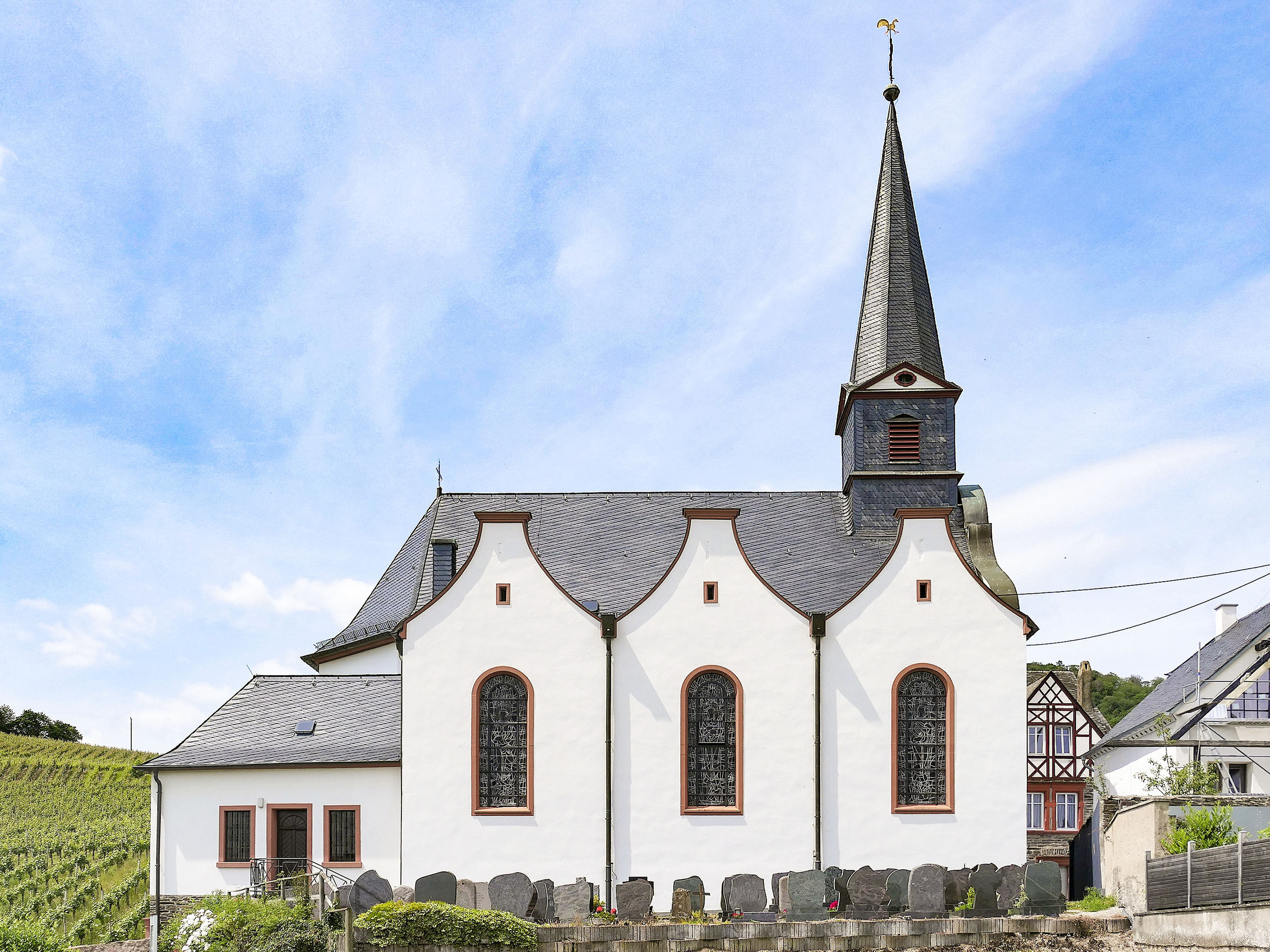 The districts of Monzel and Osann were first mentioned in the same document, the “Vita Magnerici”, in 1008.

The first visitation to all the villages in the catchment area in 1569, carried out by the Diocese of Trier, mentions a chapel in Monzel. When the old chapel was demolished in 1787, an engraved three-digit year was discovered. The existence of the chapel is documented at the latest in 1244. The current-day church (49° 54′ 28˝N / 6° 57′ 25˝E) was built in 1787 in the style of a late baroque country church. Until 1833, Monzel was a branch of the parish of Osann with its own vicar and therefore only a chapel instead of a church. On 6 December 1833, Monzel was elevated to an independent, episcopal parish. Its patron saint has always been Saint Nicholas. The separation from the parish of Osann and the fierce disputes associated with it were described in a chronicle. A true incident from the Moselle region was recorded in another chronicle:

The “War of St. Nicholas”

For years, a magnificent wooden St. Nicholas had been keeping watch over the people who crossed the Moselle by ferry in a little shrine at the entrance to Kesten from Minheim. He could also raise his bishop’s staff in warning against Saint Peter if he allowed the flood waters to rise too high into the houses. When the Wehrmacht withdrew in March 1945, the Kesten St. Nicholas was destroyed by German shells and a replacement was needed. At the time, a dusty statue of St. Nicholas had already been lying in the shed of the rectory in Monzel for years. Without a contract and with the “goodwill” of the then very elderly pastor of Monzel, the statue came to Kesten. The pastor in Kesten at the time had the find refurbished and finally, the statue was in good condition again. One morning, however, the little shrine in Kesten where the “new” St. Nicholas had been standing, was empty. St. Nicholas was gone! In the dark of night, he had been put into a sack and brought to Monzel. The new pastor of Monzel had wanted a new St. Nicholas in his church again.

Word of Kesten’s St. Nicholas being stolen spread quickly. The people of Kesten rushed to the shrine to make sure that it was actually empty. The statue of St. Nicholas, secured with chains, now stood in the sacristy of the Monzel church in church territory. The police had no access there – no one could get access to the sacristy. One morning, when the people of Monzel went to church, they were shocked to discover that the only remaining small statue of St. Nicholas had disappeared from its place above the portal outside the church. However, it had not been stolen, but stood intact on the small roof of a wayside shrine between Kesten and Monzel. It held a sign that read “Kläne Krobbat, wo ös dei Vadda?” (“Little rascal, where is your father?”). The small statue was brought back to Monzel immediately. However, the people of Kesten were still anxious to find the hiding place of the large St. Nicholas. They therefore called out during the silence of a mass in Monzel: “Whoever stole St. Nicholas, whoever carried St. Nicholas up the path, whoever put St. Nicholas in chains in the sacristy.” The negotiations for St. Nicholas proved unsuccessful. Regional press reported eagerly. For carnival in 1950, the people of Osann made fun of the dispute between Monzel and Kesten with a float that was driven through both villages. The episcopal court in Trier decided the case in favour of the parish of Monzel at the beginning of the 1950s, and awarded it the statue of St. Nicholas. However, it had to reimburse the parish of Kesten for the costs of restoration. With this money, the people of Kesten then bought a new St. Nicholas for their shrine. The people of Monzel, meanwhile, made fun of his appearance because he had no beard. The press continued to report on the “War of St. Nicholas” until the early 1960s. The precious Monzel St. Nicholas was taken to the restorer again in 2012 and restored to its present condition. We recommend a detour to the district of Osann. There, you can visit the church of St. Peter and “the castle in the vineyards” as well as learn two more wonderful (true) stories about the district of Osann. You will find the church on Moseltalstraße in Osann. 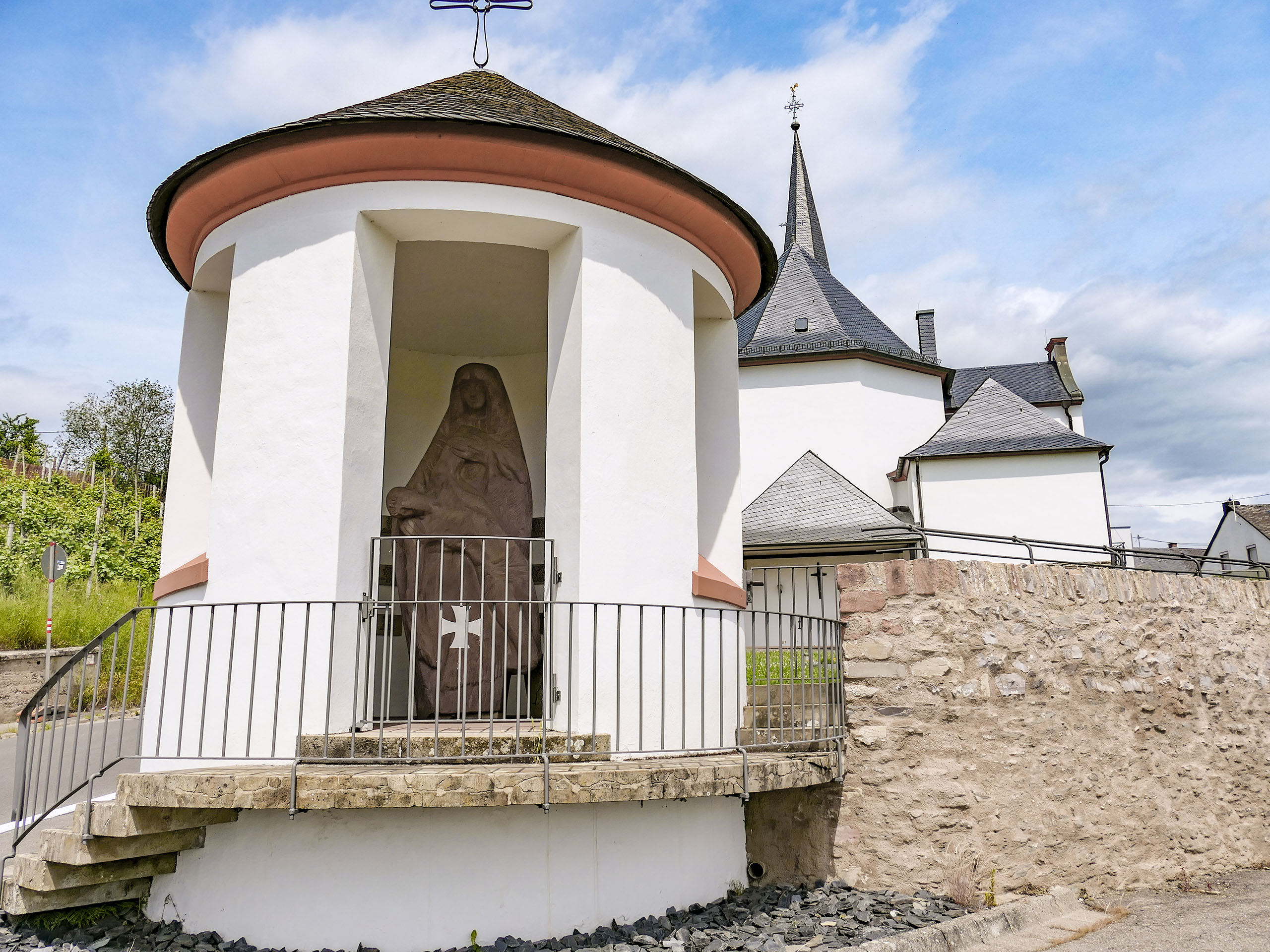 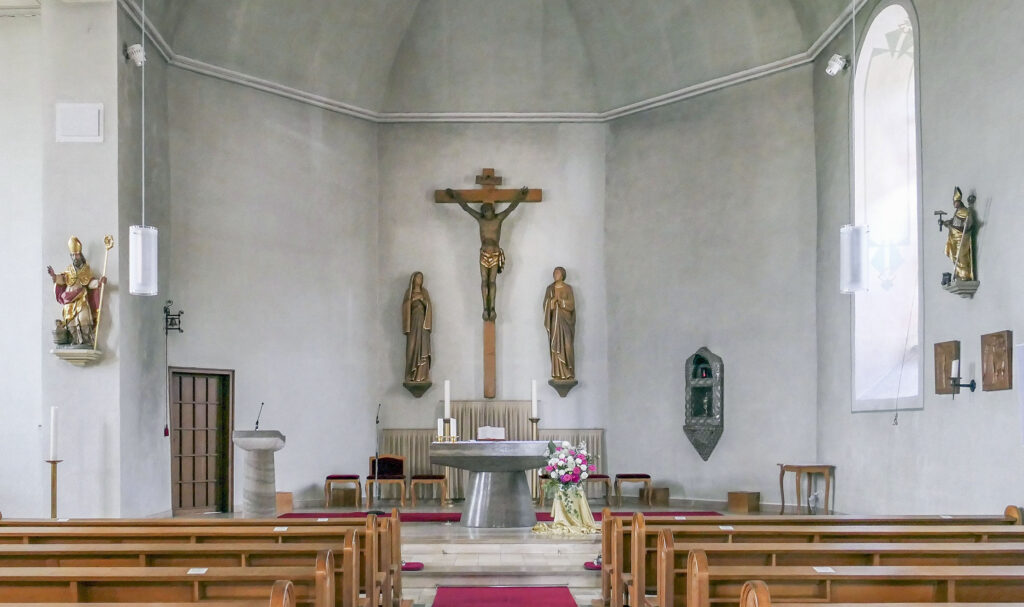 Guys, why are you arguing all the time? What’s your fighting about? Is it possible that you just don’t have your feelings and passions under control and that’s why you’re letting yourself go like that? You always want everything but you get nothing. You envy others, and if your thoughts could kill, there would certainly be a few dead bodies among you already. Arguing seems to be normal, you’re fighting each other. But that’s no good for anything, you guys need to start …

At this station you will find an e-bike charging station! It is located at the Hotel Moselsteig, Noviander Weg 3, Monzel.