The place Minderlittgen is said to have derived from the Treveri. The first documented mentions of the village date from 912 as Lüttaco and from 1147 and 1152 as Lideche (Minoris Lideche). The location of Minderlittgen on the high plateau of the southern Eifel offers cyclists and pilgrims interesting vantage points into the surrounding area.

The first news about a chapel in Minderlittgen dates back to 1309: pastor Richard von Lithiche mentioned the “Mariencapelle” in Minderlittgen. In 1569, a church record states that this chapel had 2 altars and 3 chalices. The church was dedicated to Saint Mary. Today, its patron saints are the apostles Simon and Judas, as well as Saint Mauritius.

When the old Archdiocese of Trier was reorganised by Bishop Charles Mannay in 1804, the filial villages of Minderlittgen and Hupperath were separated from the parish of Großlittgen and formed a state parish in the deanery of Wittlich together with Bergweiler. Hupperath was designated as the parish. However, Minderlittgen did not want to accept that. “… It should be noted at this point that the unregenerate and pugnacious behaviour of the filialists was not directed against the fellow parishioners of Hupperath, but solely against the provision of the clerical authorities …” (Anniversary magazine, 150 years of church choir “Cäcilia” Minderlittgen).

Pilgrimages to Klausen and Trier were mentioned early on. Once abolished in 1831, the pilgrimage to Klausen was reintroduced in 1868. However, the relationship with Klausen was not only characterised by pilgrimage. In 1931, the “Turk organ”, which is still preserved today, was built by Anton Turk in Klausen at a price of 6,500 marks.

The “Bildchen”, a small shrine dedicated to Mary which can be found on the Minderlittgner Bann at Musweiler Pfädchen, is also worth mentioning. “Especially at times of pilgrimages to Klausen, you could see devoutly praying people kneeling in front of the picture in the oak tree,” as Pastor Bicking wrote in October 1852. He continued: “… A very old oak tree, in which a round stone image of the Sorrowful Mother of God, carved out a foot or so in diameter in bas relief, had become ingrown over time.” The oak was felled after being struck by lightning. The wood was auctioned off. The parish council at the time stated that the money raised would be used to replace the old image of the Virgin Mary with a new shrine. It was to be placed where the oak tree used to be. After some time and disputes, the “Bildchen” was erected and consecrated in 1852.

In the past, there is said to have been a pilgrimage route coming from Manderscheid to pilgrimage past the chapel and the shrine of St. Mary straight to Klausen. Today, the Eifel Pilgrimage Cycle Route is the new connecting route for pilgrims from the Eifel via Minderlittgen to Klausen. 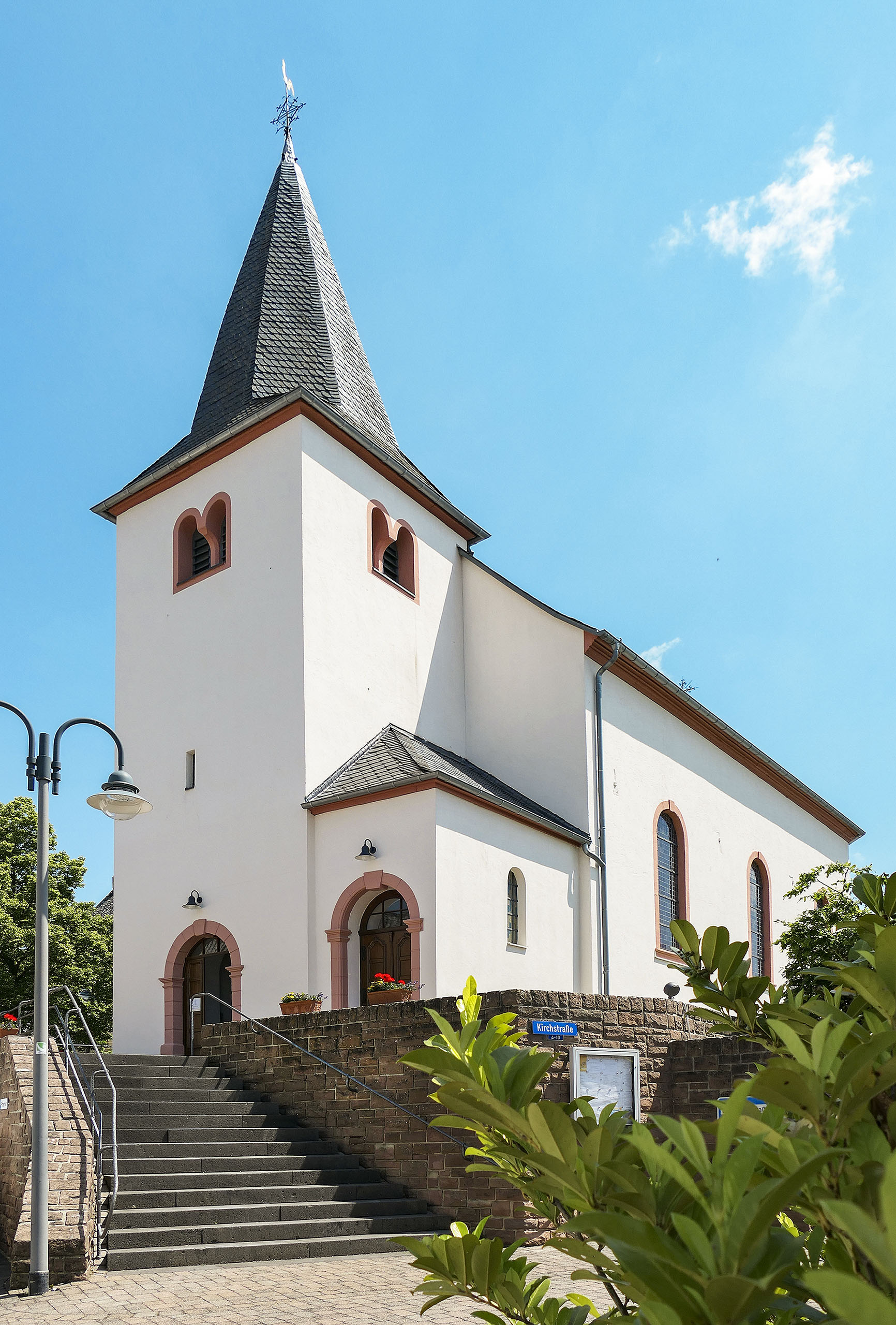 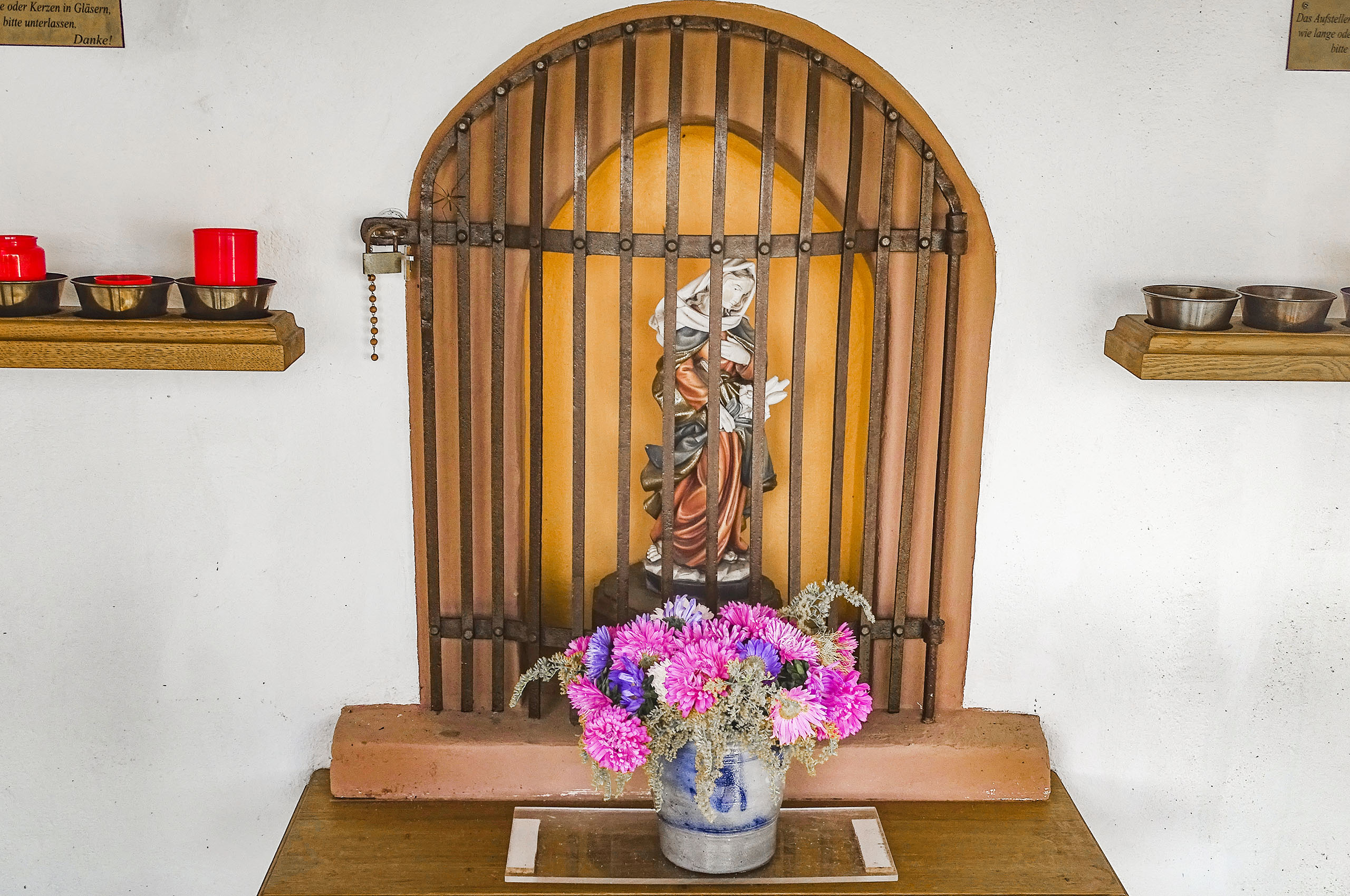 I imagine, Mary, that you were young, lively and full of questions, you laughed at the well with other girls and women and told of your dreams and desires. You were engaged to Joseph. We don’t know if you were happy, but you surely imagined your life as others had it: the wedding, being one with Joseph, children, work, neighbours, celebrations – all arranged with faith in Yahweh. But suddenly, HE knocked at your door. You let him in, and everything changed. I imagine, Mary, that you often felt miserable after saying “Yes”, how you would have liked to take it back, even later, when no one gossiped about your “rush” anymore – even when Jesus grew up. The fact that you persevered, Mary – I am in awe! When I envision you, Mary, as a person that painstakingly has to renew her “Yes” time and again, you have a lot to tell me.