The districts of Osann and Monzel were first mentioned in the same document, the “Vita Magnerici”, in 1008. The document lists a certain “Ecclesia de Osanna”.

The present-day Catholic church of Saint Peter (49° 55′ 15˝ N / 6° 57′ 09˝ E), whose patron saint, accordingly, is Saint Peter, consists of a four-axis, aisleless nave with a choir closed on three sides and a three-storey west tower. It was built from 1765 to 1772 in the transition period from the styles of late Baroque to Rococo. Its churchyard cross in the form of a baroque crucifixion shrine is located at the tower. The historical architectural ensemble of the parish buildings including church, old churchyard, rectory and former estate buildings constitutes a separate district enclosed by walls. 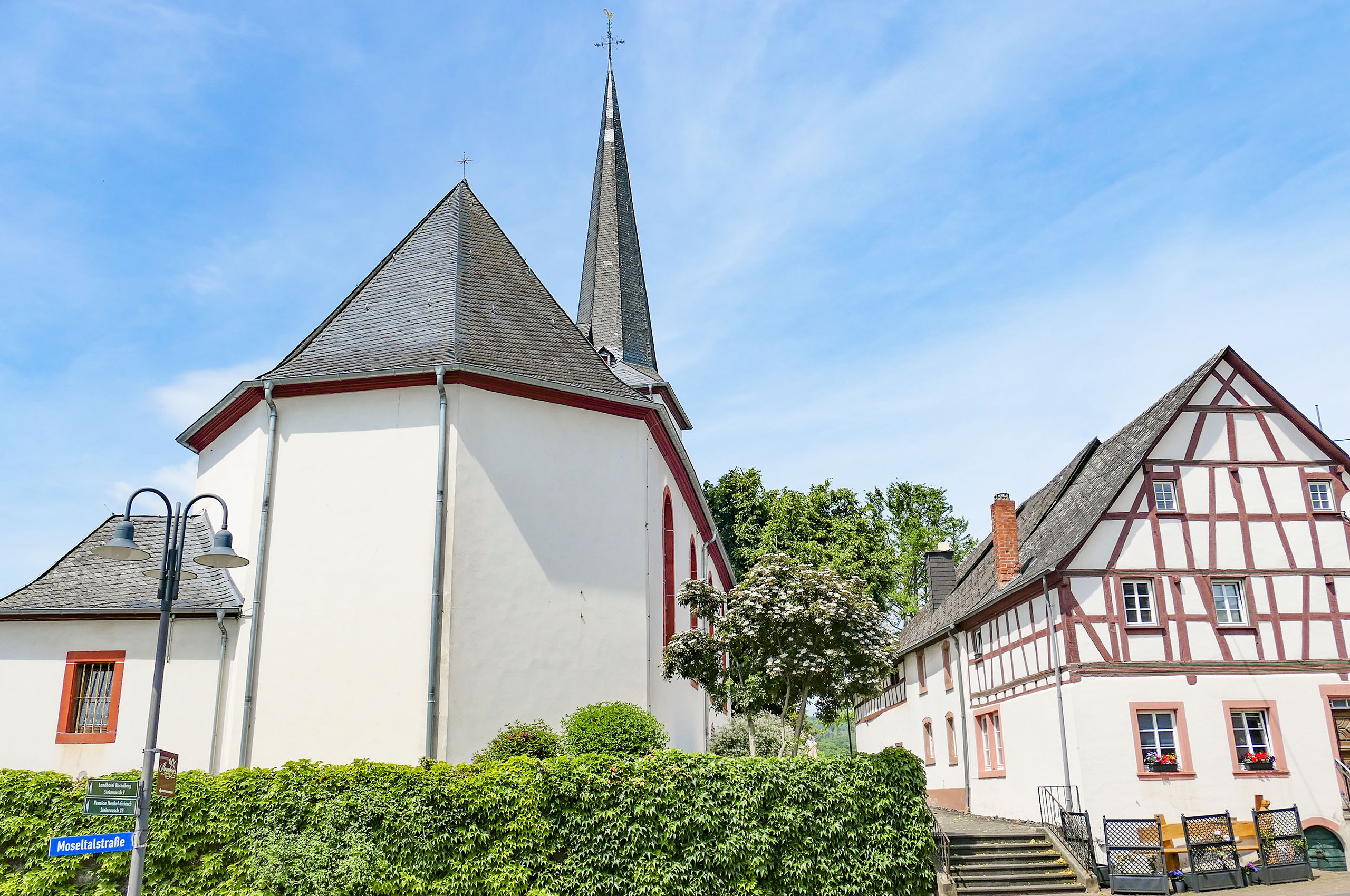 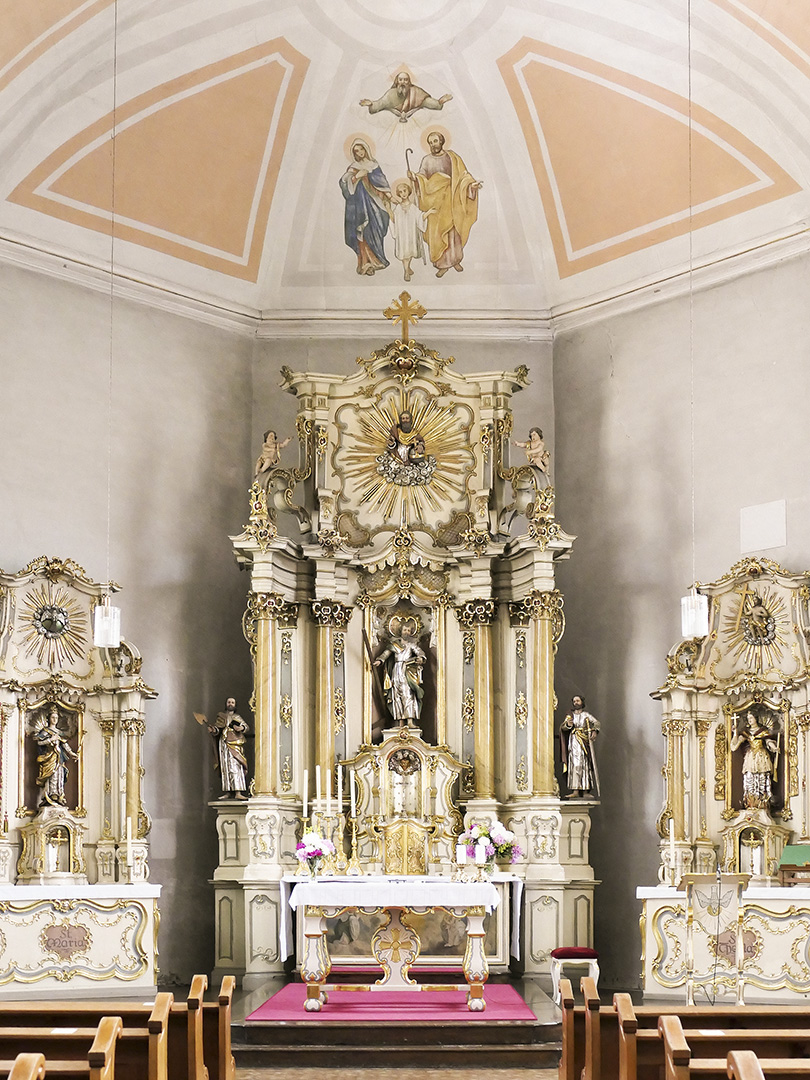 The enclosed nature of this complex is emphasised by an archway dating from 1772, which was used to close off this district with a gate in earlier periods. The rectory has been referred to as “the castle in the vineyards” since the early 2000s. The former estate building houses both the parish hall and the office for the current-day parish community “Right and Left of the Moselle”. The Catholic parishes of Osann, Monzel, Brauneberg with its Mülheim filial, Filzen, Kesten, Maring-Noviand, Veldenz and Wintrich are managed from here.

A wayside shrine called “Bildschi äm Fiwerschi” stands on the pilgrims’ path to Klausen, approximately 1 km before Neu-Minheim. Its existence is preceded by an extraordinary story: “A pious man from Ürzig on the Moselle vowed to God to go on pilgrimage to Klausen. He forgot, fell ill and died. One of those days, a friend was walking the same path and saw the deceased from afar. However, his greeting went unreturned, the other man passed by silently. Once home, he told the whole story and learned of the death of his friend. In the place where he had met his friend, the shrine was built.”

Information regarding the text: History of a wine village in the Moselle region

The poem of “Black Pitschi”

The following poem describes the life and death of “Lumpen Peter Zughetto”, known in Osann as “Black Pitschi”, who wreaked havoc alongside notorious robber “Schinderhannes” in the Hunsrück and on the Moselle.

To read more about this story, go to the website www.eifel-pilger-radweg.de or use the QR code:

Black Pitschi, a rascal,
lived from hand to mouth,
stole what he wanted,
be it clothes, ham or gold.
With his pistol he killed many a man
who had dared to laugh at him.
In Osann, Black Pitschi was recognised,
as Mathias Schander stood guard.
He spotted the rogue behind a stack of hay
and pointed his shotgun at him.
Two shots echo through the night,
as the robber is brought down.
Zughetto was only 30 years old
when his life came to an end.
His grave was placed by the wall
behind the church,
and in 2008, Mathias and Enrico
commemorated him with a basalt stone.

A French rapier and flintlock pistol from the time when Peter Zughetto lived (property of G. Traut). 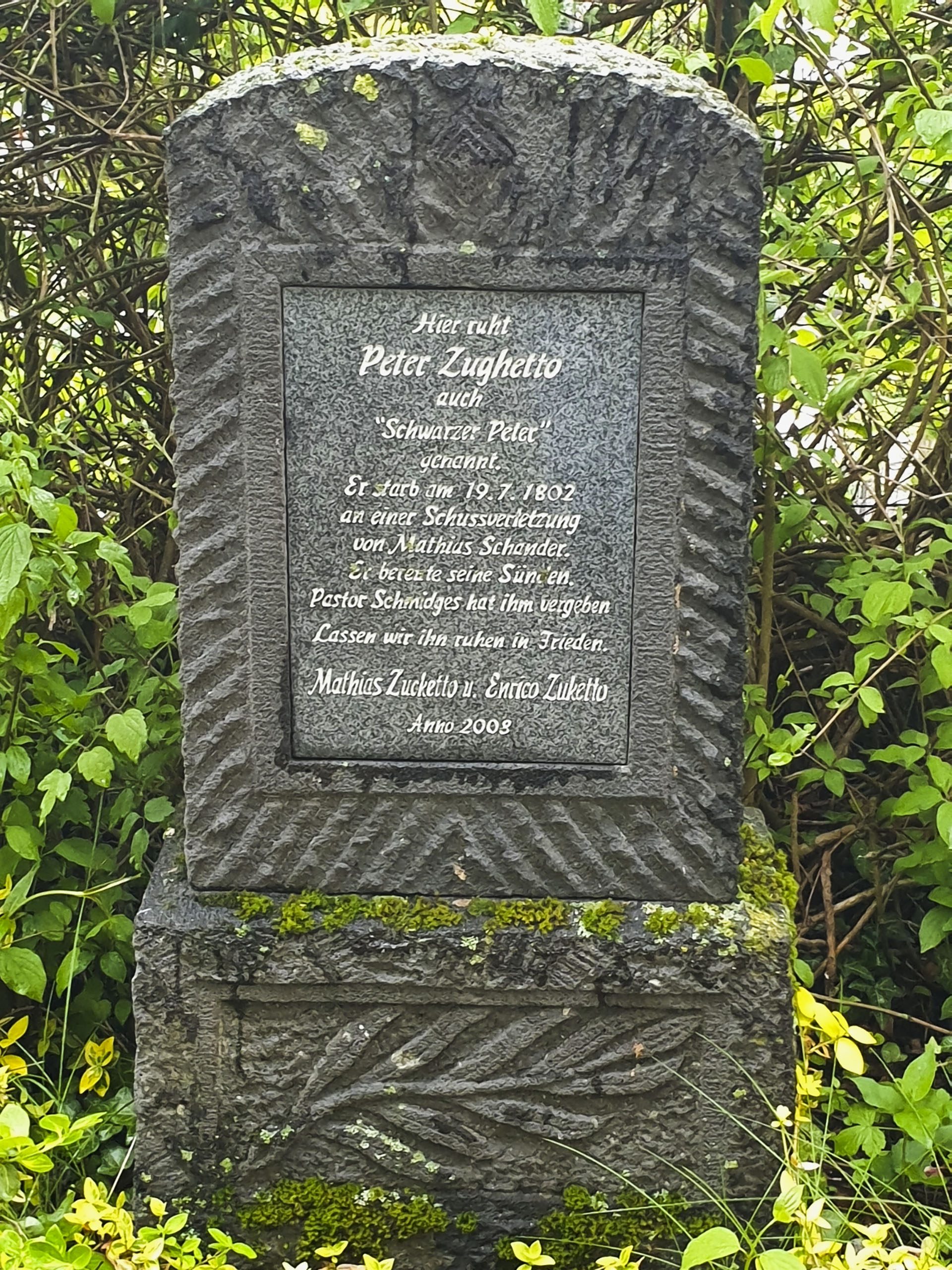 Mindful and respectful encounters – being open for different cultures

Deduschka I’ve been living in this country for an eternity / This country that Deduschka chose / I was still small, I wasn’t asked / I had no idea of our shared history / Countless generations / Millions of my ancestors had lived here / But this country did not spare them / As hard as they tried, it was not rewarded / How many memorials will it take / Until the last tear falls from our eyes? / Jewish life – more precisely: synagogues, lifeless museums / Or behind bulletproof glass / Ready for the next one to plan an attack / Waiting for the next massacre / Masked as criticism of Israel – that’s allowed after all … … Deduschka, you trusted them / But your trust was betrayed / This is why you were never at home here / For 1700 years, can you believe it? / And when my grandchildren ask me one day: Sabale, what was it like in your childhood days? / I will tell my grandchildren: “We will never be chased away again.”

At this station you will find an e-bike charging station! It is located at the Landhotel Rosenberg, Steinrausch 9, Osann.