Himmerod abbey (5o• 01‘ 41-N I 6• 45‘ 24- E) proudly traces its toundation back toSt. Bernard ot Clairvaux, who, when choosing a monastery site, was so enthusiastic about the Salm valley between Grolllittgen and Eisenschmitt that he exclaimed: “This is truly an isletor the Most Blessed Virgin Mary!” The terrain – still dominated by thorns, scrub, marshy valley meadows and the Salm river at the time – presented an ideal challenge tor the tounding monks intending to settle their new habitat there around 1135. 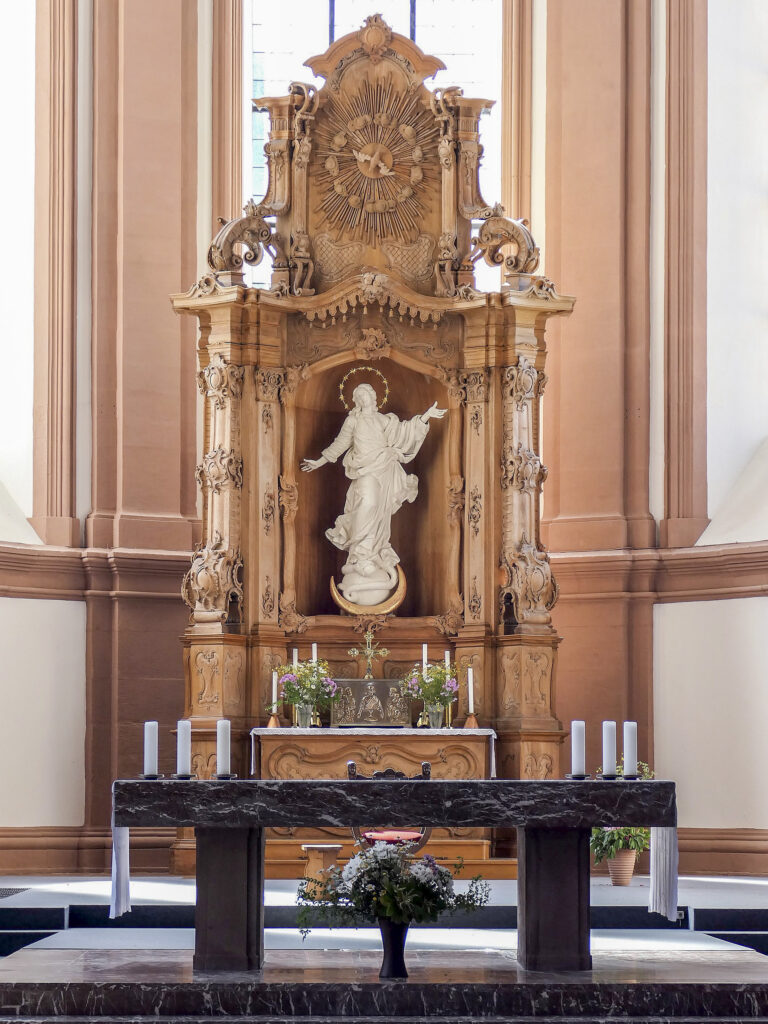 The Cistercian monastery enjoyed great popularity and was in the tavour ot the Archbishop ot Trier. Young noblemen ot knighthood sought out the monastery. They brought land and tarms into the monastery property, which meant that the convent owned a considerable landed estate. The construction ot a spacious library, and thus the copying ot books, was one ot the most imponant tasks in Latin monkhood. The monastery veriflably possessed a remarkable library trom the 15 century onwards. The new addition ot a new hospital meant that the poor, the sick and pilgrims could knock at the monastery door at any time.

According to the testimony ot Caesarius ot Heisterbach, the starving Eitel population received generous help in times ot need: “Abbot Gevard ot Heisterbach had an ox boiled daily with vegetables and distributed with bread to the poor. This way, alt the needy were ted until the next harvest .. .!” With Napoleon‘s secularisation in 1802, the monks lett their monastic home and the church suitered misuse as a quarry. lt was not until 1922 that the canonical re-establishment ot Himmerod was celebrated. The monastery today still presents as a place that radiates spiritually tar beyond the region. All the monks who once lived here have lett their mark on the Iandscape and the surrounding parishes. For the Eitel people as weil as tor visitors, it is “a place ot special radiance, where spirituality, church and culture, indeed God and man, meet“. The Eitel Pilgrimage Cycle Routepasses churches, wayside crosses and saints’ shrines with undiscovered or reissued anecdotes to explore along the way. The tact that the route was not chosen at random and Leads through the Salm valley to the Maare-Mosel Cycle Tour is based on the lives ot some monks who worked in the Himmerod monastery and spent their last days in the Siebenborn monastery near Maring-Noviand and died there (e.g. Petrus Hund, abbot ot the Himmerod monastery trom 1449-1468, died in Siebenborn in 1469). ln the saints‘ shrines, visitors can learn about the Situations in which local people asked the saints tor help and received it.

The “David’s Chapel” in the abbey church in the Himmerod monastery, where the bones ot David ot Himmerod are kept in a precious shrine under the altar table, teils ot the healer and mystic (born 111 0 in Florenceldied 11 December 1179 in Himmerod). He was revered by the people as a saint because ot his exemplary monastic lite, his healings and mystical experiences. Many women called on him tor conception and sate childbinh. ln 1699 his cult was confl rmed by the generat chapter, recognised by Rome in 1971 and extended to the whole Cistercian order without Obligation. Memorial plaques placed there tor thanks or requests illustrate th is.

Information regarding the text: www.abteihimmerod; texts from the book “Himmerod, Geschichte und Sendung” (Abbat Dr. A Schneider), Chronicle of Manderscheid 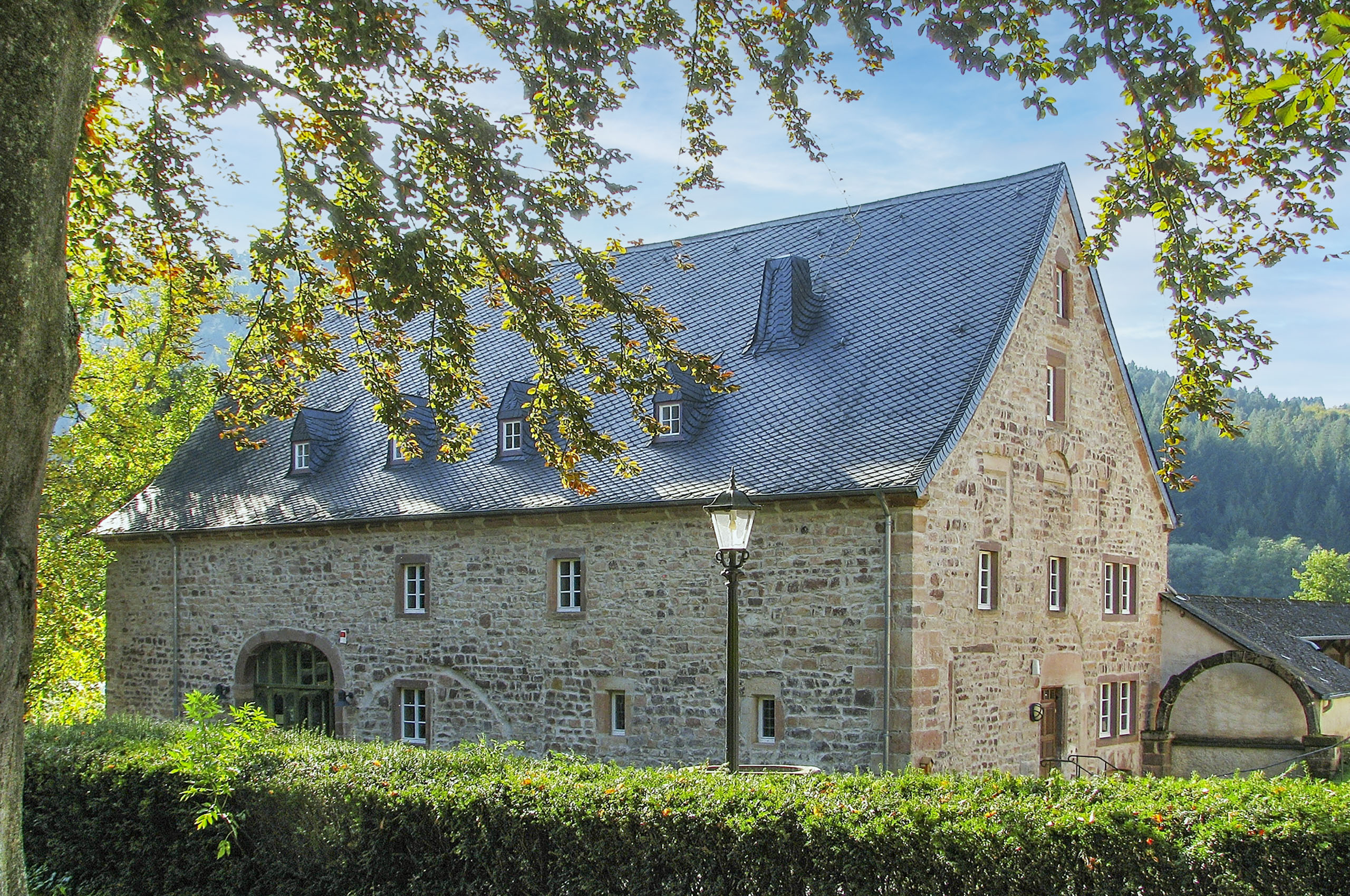 A hiker was surprised by a heavy thunderstorm in the mountains. He sought refuge in a monastery, and since his clothes were completely drenched, the monks invited him to spend the night in the monastery. The hiker gratefully accepted the invitation. Intrigued, he had a look around the monastery and was astonished by the plain furnishings of the cells. “Where’s your furniture?” he finally asked of one of the monks. Instead of answering him, the monk asked a counterquestion: “What about you? Where is your furniture?” / “Well excuse me, I’m just passing through!” / “See?” replied the monk, smiling enigmatically. “So are we.”

At this station you will find an e-bike charging station! It is located at Abteistraße 3 in Großlittgen.